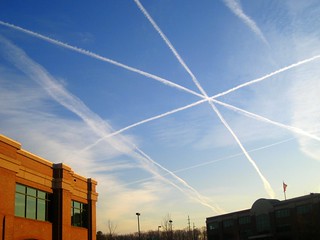 Posted by Adrian Pritchett at 08:14 No comments:

Posted by Adrian Pritchett at 08:08 No comments:

Email ThisBlogThis!Share to TwitterShare to FacebookShare to Pinterest
Labels: photos

I showed up for advance voting downtown yesterday around a quarter till one. There was a line outside the elections office, and it was lightly raining. A woman with an ebullient personality, amplified by day drinking, joined the line behind me, and we chatted about how it was good to see such participation and how the rain tested our resolve. She also remarked how it was the wrong day to wear a dress since it was both rainy and cold. Her male companion who had given her a ride joined her and helped her into a raincoat on top of the coat she was already wearing.

When the line moved forward, she remarked, "Look how everyone is moving forward like a herd of cattle!" Her companion gruffly deadpanned, "It's called a line." He had a sense of humor, too, though: He stepped to the side to smoke a cigarette, and when the line moved forward, he looked at her and said, "I'm still in line ... I'm still in line," as he took corresponding steps forward in parallel.

Once inside, there was a short line to show your ID, another short line to take your paper and get a card for the voting machine, and another short line to get to a machine. There were workers directing people at each step, and it probably took as much attention and response as directing traffic on the road. One poll worker said that there had always been a line each day all day long. It will be interesting to learn the percentage of turnout after election day.
Posted by Adrian Pritchett at 07:55 No comments:

Southeast Clarke Park has a new bridge over a creek connecting walking trails situated between Lexington Road and Whit Davis Road. It now connects all the trails between three parking lots around the park. The bridge was purchased mostly from a $28,000 grant from the Riverview Foundation, and Athens-Clarke County Leisure Services also gives mad props to Boy Scouts troops 7 and 149 for clearing the trails to connect this bridge. 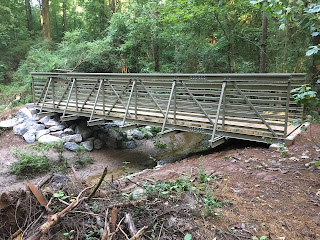 Posted by Adrian Pritchett at 09:48 No comments:

Local potter featured in OCAF’s Perspectives: A mainstay of Watkinsville since 1972, Alice Woodruff is best known for her pottery. Her work will be showcased at the Oconee Cultural Arts Foundation’s 16th annual Perspectives Georgia Pottery Invitation.
Posted by Oconee Democratic at 07:44 No comments:

Washington Mayor's residency called into question: The mayor of one CSRA city points to controversy in the wake of some in town complaining about his home address.
Posted by Oconee Democratic at 14:14 No comments:

Invasion of the electric scooters

We noticed them this morning -- pairs or trios of electric scooters parked in the most random places, such as on the grass next to East Campus Road at College Station Road and on the sidewalk in the middle of the block in front of the Holiday Inn on Broad Street. These are the small, narrow kind that one stands on. They are labeled with the name "Bird." I think these scooters are rented through a smartphone app and they're going to be pretty annoying.

We pretty quickly noticed lots of people riding them. It was like they were an instant hit, or at least people were curious about them. I myself am curious about the coming response of our community and local government. Surely it is not legal to just park a scooter on a sidewalk, and this can't be a sustainable business model or something we'll have for very long in our town.

The scooters were often obstructing public sidewalks. I noticed that three of them were later moved to the edge of the curb -- where they threatened to obstruct vehicle traffic. The next time I went by, two of those were gone. Anyway, I hope they are gone for good soon.
Posted by Adrian Pritchett at 18:22 1 comment:

Say it ain't so

I just heard on the radio that the 5 Points Waffle House is closing due to a lease dispute. Man, what a gut punch. I get it that that location is prime real estate and I suppose thats whats driving this but think about how many generations of Athenians and UGA students have frequented that place in varying degrees of sobriety over the years.
Posted by Tim at 07:40 No comments:

Pete McCommons of Flagpole was recently recognized by the Grady College of Journalism and Mass Communication at the University of Georgia with the inaugural Rollin M. "Pete" McCommons Award for Distinguished Community Journalism. McCommons wrote in his March 7 "Pub Notes" column that "it takes a community to support community journalism." He in turn recognized many individuals who participated in and supported local journalism here in Athens, as well as those who made Athens such a great place for community journalism.

Read more »
Posted by Adrian Pritchett at 21:24 No comments:

There are signs announcing a store closing sale at Junkman's Daughter's Brother on West Broad Street. Interested in posters and home decorations, I dropped in and learned that the discount is ten percent. Not finding anything I particularly wanted, I might browse some more if he drops it down to fifty percent.

Does anyone know when the store is actually closing? Is it for real this time?

Posted by Adrian Pritchett at 12:53 2 comments: