A slice of life from downtown Athens today, as reported by Lynn:

Who would have thought that the simple reading of a new book and a lavender cup of latte from Jittery Joe’s would have landed me the experience I had this morning? This encounter has consumed my mind all day and I want to share my story.

In order to enjoy my coffee and to be able to focus on my reading, I walked around downtown until I found a park bench with the smallest amount of sun shining on it so I wouldn’t sweat and melt down into my shoes.

Edward, whom I would meet in a few moments, was charging his cell phone while sending text messages to his family and friends.

His friend, George, whom I would also meet very soon, was outside laughing and talking about how he had a jelly bean in his pocket (that he carried around) because he didn’t like jelly beans. Edward, his friend, was trying to guess the flavor George might like (or what candy in general his friend would enjoy if not a jelly bean). The guys were having so much fun, I couldn’t help but listen to them laugh and cut up. They were so positive and full of life!

I stopped reading my book and walked over to introduce myself and George went inside Subway to do whatever it is that he does in there. Edward began looking around in his backpack for sandwiches to give his friend to eat. Both, I would learn, are homeless!

Edward and I chatted a bit and I learned that he was invited to Harvard University years ago to work on his MBA. He decided to become a firefighter and is recently retired from that job. His eyes sparkle with enthusiasm when sharing his story!

George, when invited out of Subway to come join us, was encouraged by his friend Edward to sing for me so that I could learn of his musical talents. He began singing Josh Grobin’s song, “You raise me up,” and sang it loud enough for many of those walking by to hear and enjoy.

The nice thing about this encounter with Edward and with George is that I have recently been homeless and I understand what it is like to have absolutely nothing. No food, no clothes, no way of bathing, etc. What the three of us shared in common was our ability to choose happiness and to roll with the punches.

We all agreed that life will pull you down at times. Life will also be good to you at other times. One of our “good times” today was sharing our moments together and living in the moment created just for the three of us to connect and become friends. 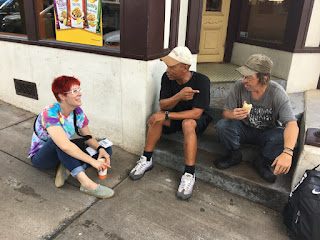 Posted by Adrian Pritchett at 22:22