The ladies cheered for me as I ran up the walkway toward the Gamma Phi Beta house, and I felt like cheering, too, because I had just been offered the use of solar viewing glasses at the peak of darkness during our 99% solar eclipse. I had not expected to get a chance to get such a good direct look at the sun during the most magical moment of our eclipse, but I had all the luck to be in the right place at the right time.

I'm a bus driver for the University of Georgia. (If that is news for you, then read this article on why I left law practice to become a bus driver.) August 21 was just another workday, and with so many part time student workers marking themselves as "unavailable," I expected to be at work driving around, so I had no idea if I would be in a place where I could park my bus to take a look. Besides, I had not found any solar viewing glasses, so I did not think I would get to look at the sun. I did see an Athens Transit driver put on a pair of glasses and look up while her bus was at a service stop, so of course I felt a little left out.

Before the eclipse, I heard on our two-way radio that Sanford Drive at the stadium was full of pedestrians going to the eclipse viewing party. As I made my trips on the Milledge Avenue Route, I picked up passengers carrying solar glasses, and many of them had no backpacks, which indicated they were not going to class. One passenger asked me "Are you excited?", so I explained how I didn't know what to expect to see today. She told me that she had gotten a tip on solar glasses being available at a particular store in town and bought a pair before they sold out.

I knew about how to view the sun through a pinhole projection, but I saw how the trees really make the best images. What I had heard was really true -- you can see crescents everywhere while the sun is partially eclipsed. The photo below was a sidewalk near Jackson Street and Peabody Hall: 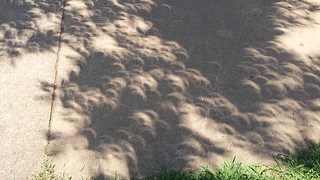 I had known the eclipse would start shortly after one o'clock that afternoon. I wasn't quite sure if the sunlight was dimming, and the occasional clouds were throwing off my perception. While stopped in traffic I checked a pinhole image through a postcard and could barely see that the moon had taken a bite out of the sun. I did not notice these crescents everywhere until the eclipse had progressed. It also took some time to really notice that the sun was less intense, though the world still looked pretty much the same.

When I drove around to Clarke Central High School, I had been mesmerized by the crescents for quite some time. 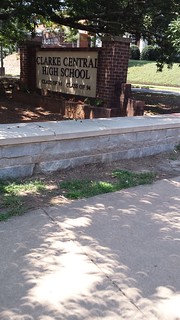 Traffic had been pretty light, which I guess was not surprising. People were either out of town to visit the total eclipse zone or else staying in place for their eclipse viewing parties. There were small groups of people up and down Milledge Avenue with eclipse glasses, standing outside offices and Greek houses. One office building had a tent which reminded me of football tailgating, but none of the crowds were that big. Even my glimpses of the stadium revealed no one in the upper decks.

By the time I reached the Georgia Center for Continuing Education, the crescents were thinner, and the dimming of the sunlight felt really, really weird. Of course, there were idiots driving around in a near-total eclipse without headlights, just like they drive in the rain and sunset hours without headlights (not surprised). 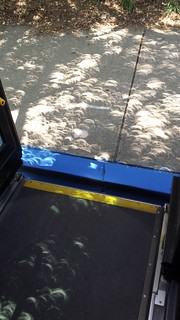 (For the record, I parked the bus and took the above photo while standing near the door, not violating the policy prohibiting the use of electronic devices in the driver's seat!)

When I first noticed that the sunlight was getting dimmer, it felt like there was a haze in the air. But then I would blink and see how clear and sharp everything was, just like it was a clear, sunny day. The best way to describe the darkness was like looking through sunglasses. But since I wasn't wearing sunglasses, it felt like I was looking through a darkly tinted window -- except, wow, those traffic lights were just as bright as if I were seeing them at night.

My first real bit of luck was finding that I reached the Henderson Avenue bus stop at or just before 2:38 p.m., the peak of the eclipse for Athens. This bus stop has a bus bay which allows us to get out of traffic, and we often use this location to park and kill time to adjust the intervals between the buses in front or behind us. I took this next photo of my bus at 2:38 p.m. It does not look that remarkable, but the light was really comparable to twilight just after sunset. You can see the aisle lights inside the bus as well as notice how bright the headlights are, and my smartphone camera selected a shutter speed of one-fifteenth of a second with an aperture of 2.2 and an ISO setting of 200 (for a scene darker than many indoor photos). 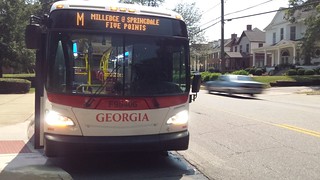 I also took a photo of the nearby Gamma Phi Beta house, though other than looking at the camera settings, the blurred photo does not look that remarkable. 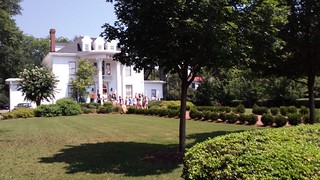 About that time I heard a woman from the porch shouting, "Do you want to use my glasses?" This was my totally unexpected next bit of luck. I ran over there (amid cheering), but before I could reach her, another woman on the walkway offered me her solar eclipse glasses. I took a look at the sun, and it looked like a thin orange crescent. It was just a very alien sight. After I lowered the glasses and handed them back to their owner, thanking her, I did exactly what you are not supposed to do -- which was to look up at the sun. Of course I was curious, but I just glanced upwards and then back down without fixating on the sun, and I immediately noticed how painfully bright it was, despite the weak twilight that it provided. Anyway, I really appreciated someone offering me the use of their solar glasses, especially by shouting over a distance. (Milledge Avenue is just such a friendly place. While jogging on Milledge I have been offered high-fives and beer by total strangers.)

I realized that what I had read about the huge difference between a total eclipse and anything less was true. See "Eclipse zone of totality a short drive away" at OnlineAthens.com. The twilight here was spooky, but the sky was still blue and the sun was too bright to stare at. (Of course, as I learned practicing night photography, the sky is always blue except when the sun is at the horizon. The sky was visibly blue, though, and the photos don't look dark.)

When I arrived back at the Arch where another driver relieved me for my lunch break, I saw that it had indeed been dark enough for some outdoor lights to turn on. A security light at 191 East Broad Street was turned on, and the lights at the Arch were still on. The sun was getting brighter, and the party was over. Two ladies wearing T-shirts with eclipse artwork offered me a brochure for Pamela's Sensational Cleaning Service. I texted my son's mother to check in and see what they thought of the excitement. I found out later that my son was much more interested in a TV show than the fact that it was getting dark in the middle of the day, but his mommy was keeping him inside for the safety of his vision anyway. He will be ten when we have the next American eclipse, so maybe he would like to make travel plans to see totality. 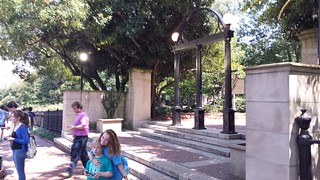 (It's blurry because it's so dim!)
Posted by Adrian Pritchett at 23:40

I took the afternoon off and we sat on the deck to observe the eclipse. I was prepared to hear the crickets and tree frogs sound off as it got darker and darker. What I wasn't prepared for was the reaction of my little dog. She will frequently, during storms, come over and sit on my foot or press up against my leg. She needs that physical contact for comfort. Thats exactly what she did when it got dark. She came over to my chair and sat up against my foot/lower leg. Once it started getting bright again she returned to normal.
It was strange to see the darkness descend and it even seemed to be quieter except for the crickets and tree frogs. It was a beautiful thing to experience.