Note: This was also published on Eye on Sports Media.

There was never any doubt that big changes were afoot at the Atlanta-Journal Constitution when they offered buyouts to members of the sports department. A bunch of big names at the AJC did take them, including columnist Terence Moore and Atlanta Thrashers beat writer Mike Knobler.

Knobler will be heading to law school in the fall, so this buyout works for him. Ronnie Ramos, who had previously been reorganized out of the sports department, is leaving the AJC to become managing director of new media strategies and content development for the NCAA (is their some irony here or what?).

But more shocking are the moves that editor Julia Wallace is making with those who did not accept the buyouts. The best way to describe it is "let's make life so miserable for everyone who refused the buyout that they will want to quit."

The best example of this is what they have done to former columnist Tim Tucker and University of Georgia beat writer Chip Towers.

The University of Georgia is located in Athens, Georgia. During peak traffic times, it can take anything from 2-3 hours to get from downtown Atlanta to Athens. Tim Tucker lives and works from Atlanta. Chip Towers lives and works from Bogart, GA, which is just outside of Athens. He has been covering the Georgia beat for 12 years or so (I forget exactly when he left the Athens Banner-Herald to head to the AJC). 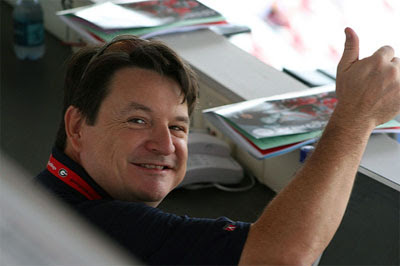 So what does Ms. Wallace do? Among other head scratching reassignments, she moves Tim Tucker to the UGA beat and moves Chip to "General Assignment Online."

This means if a big story breaks in Atlanta, Towers will have to haul arse down to Atlanta to cover it even though Tim Tucker lives and works there. And when news breaks out at the University of Georgia Athletic Association (which happens a lot), Tucker will have at haul arse over to Athens to cover that. This, of course, is in addition to having to drive both ways to cover Georgia football and basketball games, even though Chip is "write" here.

So here is a short thought for Ms. Wallace:

Where is the common sense in these moves? Of course, all of the factors that fed into this decisions are not public. But on their face, they border on stupidity at best. The Atlanta Journal-Constitution has become a joke of a newspaper in the 15 years I have lived in Georgia, and the only saving grace for the newspaper is the sports section.

Morale at the AJC, and other newspapers, is at an all-time low. Why make assignment decisions to make it even worse. Tim and Chip are excellent writers who know their stuff and know their audience. With all of the commotion down on Marietta street, why through even more discontinuity and confusion into the mix?

If the underlying desire is to make your writers so miserable that they quit, why not just cut through the charade (or perhaps crap would be a better word here), and issue their termination notices now? Or is the management of the AJC too spineless to do the right thing?

If you agree, why not email Ms. Wallace at jdwallace@ajc.com and let her know what you think?

Here are the people who accepted the buyouts at the AJC, as reported in Creative Loafing. If online is the future of journalism, a few of the buyouts definitely raise some eyebrows:

Posted by Christopher Byrne at 11:17