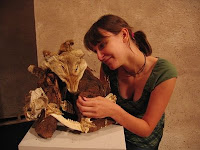 To be performed beginning this week by University Theatre from the University of Georgia Department of Theatre and Film Studies, the play "Museum" by Tina Howe is a story of more than 40 characters in a museum on the last day of an exhibition of works from three contemporary artists. It combines social commentary, hilarity, and hijinks as artists, art lovers, art skeptics, students, and museum guards pass through the gallery. "Within 86 eighty-six minutes, 48 characters cross the stage and mercilessly poke fun at the human condition in general and snobbishness in particular," explains Kalina Bakalova, a doctoral student in the department. "If Mozart had been a TV producer, this is what a 'Candid Camera' segment on art might have looked like," wrote Michael Feingold in the Village Voice after seeing different productions of the play in 1978 and 2002.

University Theatre will present their production of "Museum" with over 19 performers. It follows the UGA Arts Festival which celebrated the new building for the Lamar Dodd School of Art, so this is great timing to explore the culture of visual arts.

Regular admission is $15; admission for students with I.D. is $12. Tickets may be purchased beginning Thursday, September 11 at the University Theatre box office located downstairs in the Fine Arts Bldg. at the corner of Lumpkin and Baldwin Sts. (hours: M-F, 12 – 5 pm) or at the theatre door beginning one hour prior to show time. Reservations may be made in advance by calling the University Theatre Box Office line at (706) 542-2838.

Posted by Adrian Pritchett at 09:11